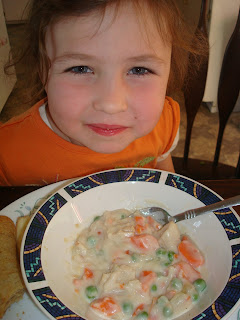 This recipe came from my MIL a few years back....I ashamed it it's the first time I've tried it...it's delicious!!

Some how I totally MISSED putting in the potatoes (which if FUNNY because that's what I was looking forward to the most!!!). I basically doubled the recipe and added a bit more seasoning. I also added white pepper (since that's one of our favorite spices!!). I used chicken broth instead of turkey broth since I didn't have any. The turkey is left over from Christmas time so it was super easy to just pull the turkey out of the freezer, let it defrost, and cut it up with my kitchen scissors. It was VERY yummy. I definitely serve this after we've had turkey again to use up some of the turkey. Since there's no "crust", you could serve this in bread bowls or even add dumplings to the top.

This is great!! I have a TON of leftover turkey to use! Thanks!

I will have to try this one too, I LOVE pot pies!

Jenn
My time is mainly spent being a wife to my hubby, a mom to three, and a Stampin' Up! demo. On my three blogs, you'll find posts about our day-to-day life, my latest stampin' projects, my latest recipes I've cooked/baked, and whatever I feel like writing about!

My Other Two Blogs