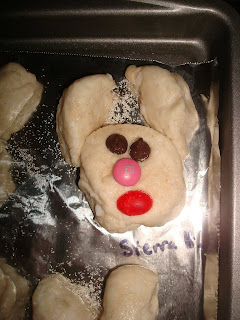 Today in Sierra's class we did a fun spring/easter cooking project. Sierra's teacher had bought the large refridgerated biscuits. I cut them in half. One of the halves became the head and the other half was cut in half again which became their ears. After they shaped the face and ears, they added chocolate chips for their eyes, a pink M&M for the nose, and half of a red jelly bean for the mouth. Cinnamon & sugar was then sprinkled on top. They turned out so cute! The only thing I'll do differently next time is be sure the mouth and nose are pushed into the dough so they don't fall off when they bake. Such a fun change from the usual sugar cookies that we usually do! 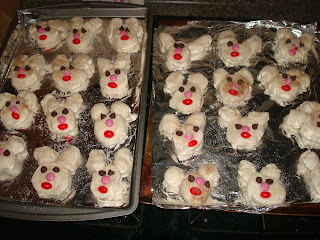 Okay, I know this has nothing to do with food...but at our house sunscreen is an absolute MUST most months of the year. Albertson's has a sale on Coppertone products for $6.99 this week. This INCLUDES the twin pack version of the spray-on sunscreen. Print yourself a $1 off coupon here and you're paying $3 for each bottle! GREAT deal! It was a great day at Albertson's for me...it's always nice to hear the cashier compliment you on your shopping but even better when the people behind you in line tell you you're a smart shopper!
Posted by Jenn at 1:03 PM 1 comment:

Jenn
My time is mainly spent being a wife to my hubby, a mom to three, and a Stampin' Up! demo. On my three blogs, you'll find posts about our day-to-day life, my latest stampin' projects, my latest recipes I've cooked/baked, and whatever I feel like writing about!

My Other Two Blogs